Verse 22: Fully comprehending this, the wise, who are mindful, rejoice in being mindful and find delight in the domain of the Noble Ones (Ariyas).

Verse 23: The wise, constantly cultivating Tranquillity and Insight Development Practice, being ever mindful and steadfastly striving, realize Nibbana: Nibbana, which is free from the bonds of yoga; Nibbana, the Incomparable!

1. appamada: According to the Commentary, it embraces all the meanings of the words of the Buddha in the Tipitaka, and therefore appamada is to be interpreted as being ever mindful in doing meritorious deeds; to be in line with the Buddha's Teaching in Mahasatipatthana Sutta, "appamado amatapadam", in particular, is to be interpreted as "Cultivation of Insight Development Practice is the way to Nibbana."

2. amata: lit., no death, deathless; it does not mean eternal life or immortality. The Commentary says: "Amata means Nibbana. It is true that Nibbana is called "Amata" as there is no ageing (old age) and death because there is no birth."

4. appamatta na miyanti: Those who are mindful do not die. It does not mean that they do not grow old or die. According to the Commentary, the mindful develop mindful signs (i.e., cultivate Insight Development Practice); they soon realize Magga-Phala (i.e., Nibbana) and are no longer subject to rebirths. Therefore, whether they are, in fact, alive or dead, they are considered not to die.

5. ye pamatta yatha mata: as if dead. According to the Commentary, those who are not mindful are like the dead; because they never think of giving in charity, or keeping the moral precepts, etc., and in the case of bhikkhus, because they do not fulfil their duties to their teachers and preceptors, nor do they cultivate Tranquillity and Insight Development Practice.

8. phusanti dhira nibbanam: the wise realize Nibbana. Lit., phusati means, to touch, to reach. According to the Commentary, the realization takes place, through contact or experience, which may be either through Insight (Magga-Nana) or through Fruition (Phala). In this context, contact by way of Fruition is meant.

9. yogakkhemam: an attribute of Nibbana. Lit., it means free or secure from the four bonds which bind people to the round of rebirths. The four bonds or yoga are: sense pleasures (kama), existence (bhava), wrong belief (ditthi), and ignorance of the Four Noble Truths (avijja).

While residing at the Ghosita monastery near Kosambi, the Buddha uttered Verses (21), (22) and (23) of this book, with reference to Samavati, one of the chief queens of Udena, King of Kosambi.

Samavati had five hundred maids-of-honour staying with her at the palace; she also had a maid servant called Khujjuttara. The maid had to buy flowers for Samavati from the florist Sumana everyday. On one occasion, Khujjuttara had the opportunity to listen to a religious discourse delivered by the Buddha at the home of Sumana and she attained Sotapatti Fruition. She repeated the discourse of the Buddha to Samavati and the five hundred maids-of-honour, and they also attained Sotapatti Fruition. From that day, Khujjuttara did not have to do any menial work, but took the place of mother and teacher to Samavati. She listened to the discourses of the Buddha and repeated them to Samavati and her maids. In course of time, Khujjuttara mastered the Tipitaka.

Samavati and her maids wished very much to see the Buddha and pay obeisance to him; but they were afraid the king might be displeased with them. So, making holes in the walls of their palace, they looked through them and paid obeisance to the Buddha everyday as he was going to the houses of the three rich men, namely, Ghosaka, Kukkuta and Pavariya.

At that time, King Udena had also another chief queen by the name of Magandiya. She was the daughter of Magandiya, a brahmin. The brahmin seeing the Buddha one day thought the Buddha was the only person who was worthy of his very beautiful daughter. So, he hurriedly went off to fetch his wife and daughter and offered to give his daughter in marriage to the Buddha. Turning down his offer, the Buddha said, "Even after seeing Tanha, Arati and Raga, the daughters of Mara, I felt no desire in me for sensual pleasures; after all, what is this which is full of urine and filth and which I don't like to touch even with my foot."

On hearing those words of the Buddha, both the brahmin and his wife attained Anagami Magga and Phala. They entrusted their daughter to the care of her uncle and themselves joined the Order. Eventually, they attained arahatship. The Buddha knew from the beginning that the brahmin and his wife were destined to attain Anagami Fruition that very day, hence his reply to the brahmin in the above manner. However, the daughter Magandiya became very bitter and sore and she vowed to take revenge if and when an opportunity arose.

But Magandiya kept on trying to make the king believe Samavati was not loyal to him and was trying to kill him. On one occasion, knowing that the king would be visiting Samavati within the next few days and that he would be taking along his lute with him, Magandiya inserted a snake into the lute and closed the hole with a bunch of flowers. Magandiya followed King Udena to Samavati's quarters after trying to stop him on the pretext that she had some presentiment and felt worried about his safety. At Samavati's place Magandiya removed the bunch of flowers from the hole of the lute. The snake came out hissing and coiled itself on the bed. When the king saw the snake he believed Magandiya's words that Samavati was trying to kill him. The king was furious. He commanded Samavati to stand and all her ladies to line up behind her. Then he fitted his bow with an arrow dipped in poison and shot the arrow. But Samavati and her ladies bore no ill wills towards the king and through the power of goodwill (metta), the arrow turned back, although an arrow shot by the king usually went even through a rock. Then, the king realized the innocence of Samavati and he gave her permission to invite the Buddha and his disciples to the palace for alms-food and for delivering discourses.

Magandiya realizing that none of her plans had materialized, made a final, infallible plan. She sent a message to her uncle with full instructions to go to Samavati's place and burn down the building with all the women inside. As the house was burning, Samavati and her maids-of-honour, numbering five hundred, kept on meditating. Thus, some of them attained Sakadagami Fruition, and the rest attained Anagami Fruition.

As the news of the fire spread, the king rushed to the scene, but it was too late. He suspected that it was done at the instigation of Magandiya but he did not show that he was suspicious. Instead, he said, "While Samavati was alive I had been fearful and alert thinking I might be harmed by her; only now, my mind is at peace. Who could have done this? It must have been done only by someone who loves me very dearly." Hearing this, Magandiya promptly admitted that it was she who had instructed her uncle to do it. Whereupon. the king pretended to be very pleased with her and said that he would do her a great favour, and honour all her relatives. So, the relatives were sent for and they came gladly. On arrival at the palace, all of them, including Magandiya, were seized and burnt in the palace court yard, by the order of the king.

When the Buddha was told about these two incidents, he said that those who are mindful do not die; but those who are negligent are as good as dead even while living.

Verse 22: Fully comprehending this, the wise, who are mindful, rejoice in being mindful and find delight in the domain of the Noble Ones (Ariyas).

Verse 23: The wise, constantly cultivating Tranquillity and Insight Development Practice, being ever mindful and steadfastly striving, realize Nibbana: Nibbana, which is yogakhem(10); Nibbana, the Incomparable! 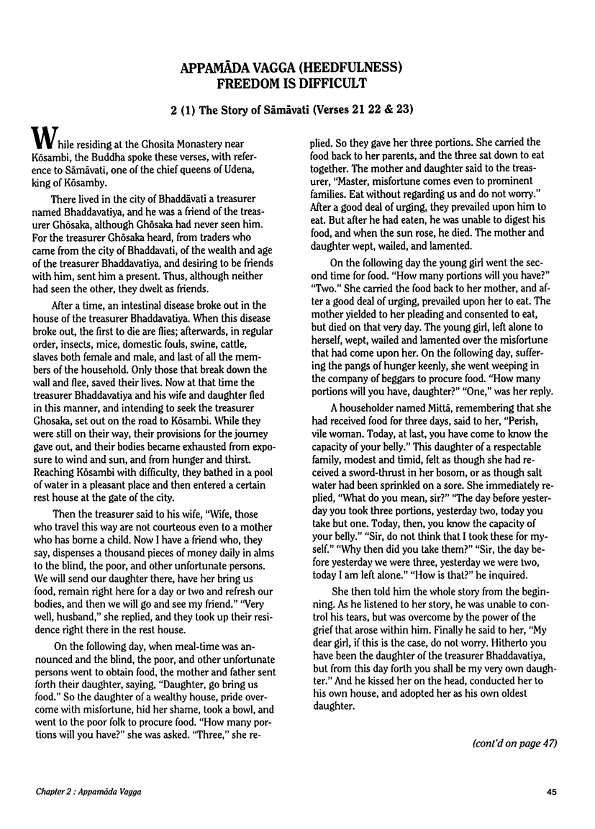 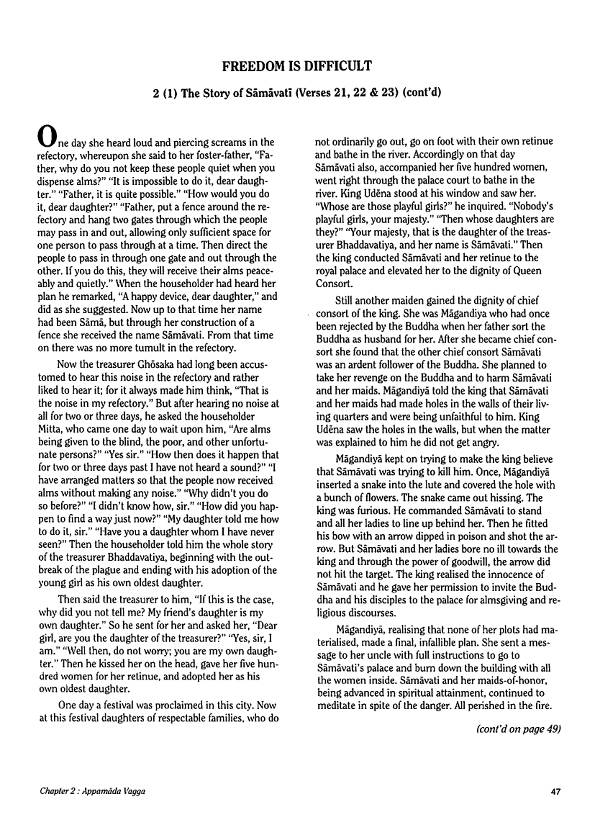 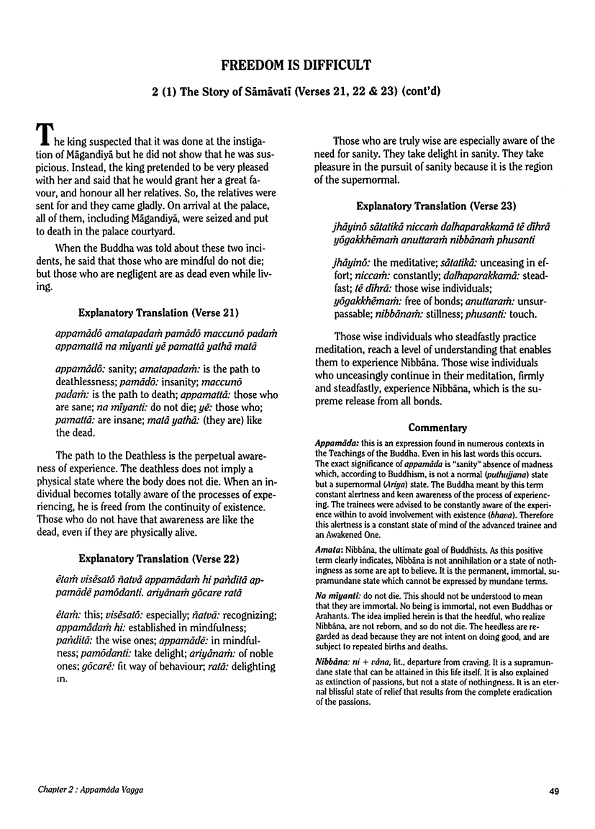 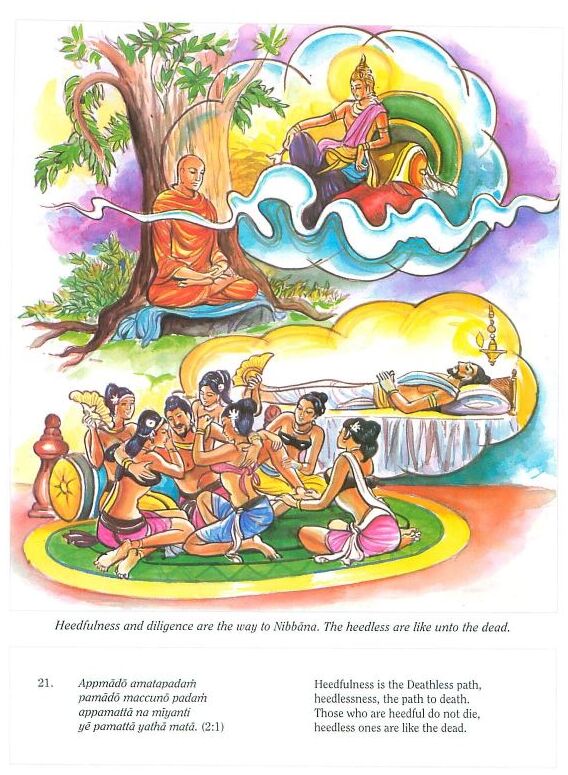 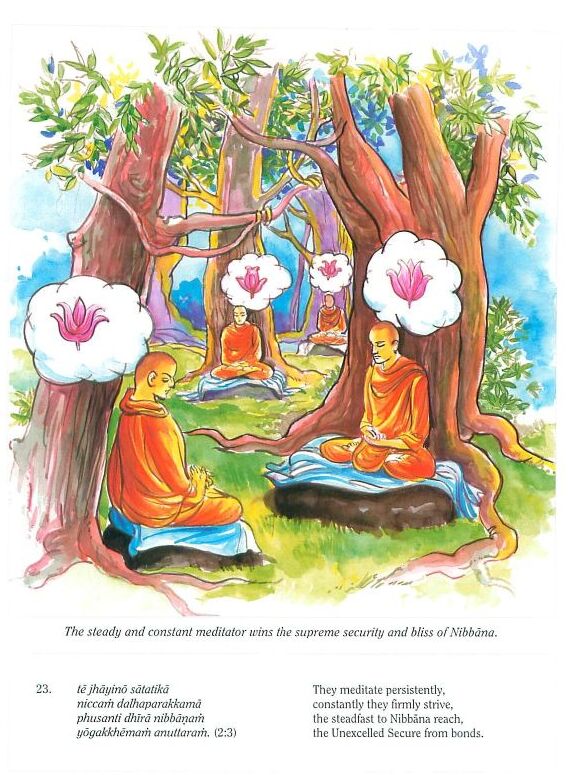