Verse 415: Him I call a brahmana, who, in this world, has given up sensual pleasures, and leaving the home-life has become a bhikkhu; who has eradicated sensual desires and has come to the end of existence.

The Story of Thera Sundarasamudda

While residing at the Jetavana monastery, the Buddha uttered Verse (415) of this book, with reference to Thera Sundarasamudda.

Sundarasamudda was the son of a rich man from Savatthi. After he had entered the Order, he left for Rajagaha, which was forty-five yojanas away from Savatthi, to practise meditation. One day, while some festivities were going on in Savatthi, the parents of Sundarasamudda missed him very much; they also felt sorry for their son who was missing all the enjoyment and they wept. As they were weeping, a courtesan came to them and asked what the matter was. On hearing about their son, the courtesan said, "If I could make your son leave the Order and return to the life of a lay man how would you reward me?" The parents answered that they would make her rich. The courtesan then asked for a large sum of money and left for Rajagaha with a number of followers.

At Rajagaha, she rented a house with seven-tiered pinnacles on the route where Thera Sundarasamudda would come on his alms-round. She prepared good food and waited for him. On the first few days, she offered alms-food to the thera at the door of her house. Later, she invited him to come inside. Meanwhile, she paid money to some children to come and play just outside the house about the time the thera usually came on his alms-round. This gave her the excuse that it was very dusty and noisy on the ground floor; with this excuse she invited the thera to the top floor to have his alms-food. The thera consented and went up and as soon as he had entered the room, the courtesan closed the door. Then she started seducing the thera. She said to the thera, "Venerable Sir! Please be my youthful and energetic husband, and I will be your dearly beloved wife. After our long and happy wedded life we can both leave it to enter the Order and strive our very best to attain Nibbana." When he heard these words the thera suddenly realized his mistake and got alarmed. Then he said to himself, "Indeed, by being negligent and unmindful I have made a great mistake."

At that instant, the Buddha saw from his Perfumed Chamber what was happening to Thera Sundarasamudda at Rajagaha. He called the Venerable Ananda and said to him, "Ananda! On an upper storey of a pinnacled building in Rajagaha, there now goes on a struggle between Sundarasamudda and a courtesan; but in the end the thera will be the winner." After saying this to Ananda, the Buddha sent forth his radiance to the thera, made him feel his presence, and said, "My son! Be resolute and get rid of love of wealth and sensual pleasures."

Verse 415: Him I call a brahmana, who, in this world, has given up sensual pleasures, and leaving the home-life has become a bhikkhu; who has eradicated sensual desires and has come to the end of existence.

At the end of the discourse the thera attained arahatship, and by supernormal power passed through the roof into the sky and went to the Buddha. 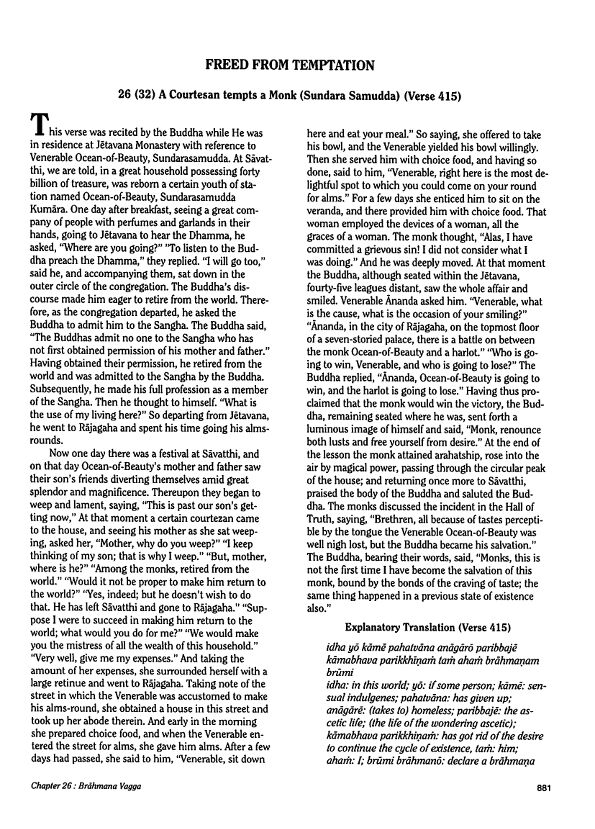 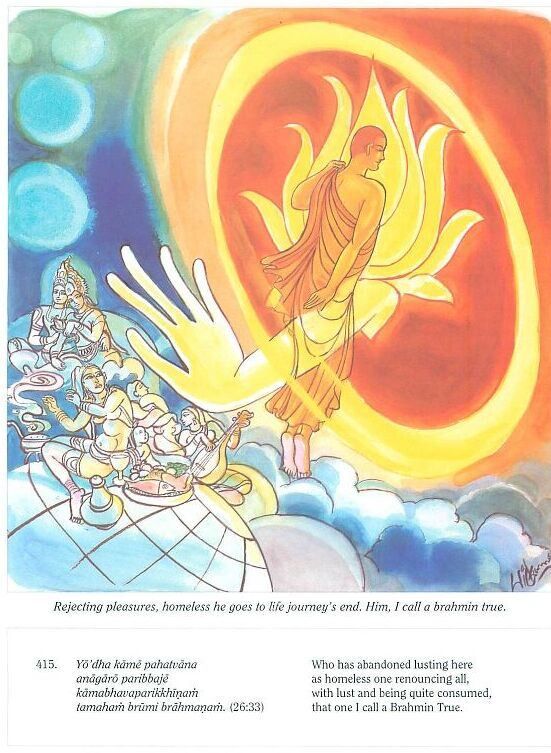