Verse 1: All mental phenomena have mind as their forerunner; they have mind as their chief; they are mind-made. If one speaks or acts with an evil mind, 'dukkha'(3)  follows him just as the wheel follows the hoofprint of the ox that draws the cart.

1. manopubbangama dhamma: All mental phenomena have Mind as their forerunner in the sense that Mind is the most dominant, and it is the cause of the other three mental phenomena, namely, Feeling (vedana), Perception (sanna) and Mental Formations or Mental Concomitants (sankhara). These three have Mind or Consciousness (vinnana) as their forerunner, because although they arise simultaneously with Mind they cannot arise if Mind does not arise. (The Commentary)

2. manasa ce padutthena (Verse 1) and manasi ce pasannena (Verse 2): Manasa here means intention or volition (cetana); volition leads one to the performance of volitional actions, both good and evil. This volition and the resultant actions constitute kamma; and kamma always follows one to produce results. Cakkhupala's blindness (Verse 1) was the consequence of his having acted with an evil intention in a previous existence and Matthakundali's happy existence in Tavatimsa celestial world (Verse 2) was the result of his mental devotion (manopasada) to the Buddha.

3. dukkha: In this context, dukkha means suffering, or physical or mental pain, misfortune, unsatisfactoriness, evil consequences, etc., and rebirth in the lower planes of existence or in the lower strata of human society if born in the human world.

The Story of Thera Cakkhupala

While residing at the Jetavana monastery in Savatthi, the Buddha uttered Verse (1) of this book, with reference to Cakkhupala, a blind thera.

On one occasion, Thera Cakkhupala came to pay homage to the Buddha at the Jetavana monastery. One night, while pacing up and down in meditation, the thera accidentally stepped on some insects. In the morning, some bhikkhus visiting the thera found the dead insects. They thought ill of the thera and reported the matter to the Buddha. The Buddha asked them whether they had seen the thera killing the insects. When they answered in the negative, the Buddha said,

"Just as you had not seen him killing, so also he had not seen those living insects. Besides, as the thera had already attained arahatship he could have no intention of killing and so was quite innocent."

On being asked why Cakkhupala was blind although he was an arahat, the Buddha told the following story:

Cakkhupala was a physician in one of his past existences. Once, he had deliberately made a woman patient blind. That woman had promised him to become his slave, together with her children, if her eyes were completely cured. Fearing that she and her children would have to become slaves, she lied to the physician. She told him that her eyes were getting worse when, in fact, they were perfectly cured. The physician knew she was deceiving him, so in revenge, he gave her another ointment, which made her totally blind. As a result of this evil deed the physician lost his eyesight many times in his later existences.

Then the Buddha spoke in verse as follows-

Verse 1 -
All mental phenomena have mind as their forerunner;
they have mind as their chief; they are mind-made.
If one speaks or acts with an evil mind, 'dukkha' follows him
just as the wheel follows the hoofprint of the ox that draws the cart.

At the end of the discourse, thirty thousand bhikkhus attained arahatship together with Analytical Insight (Patisambhida). 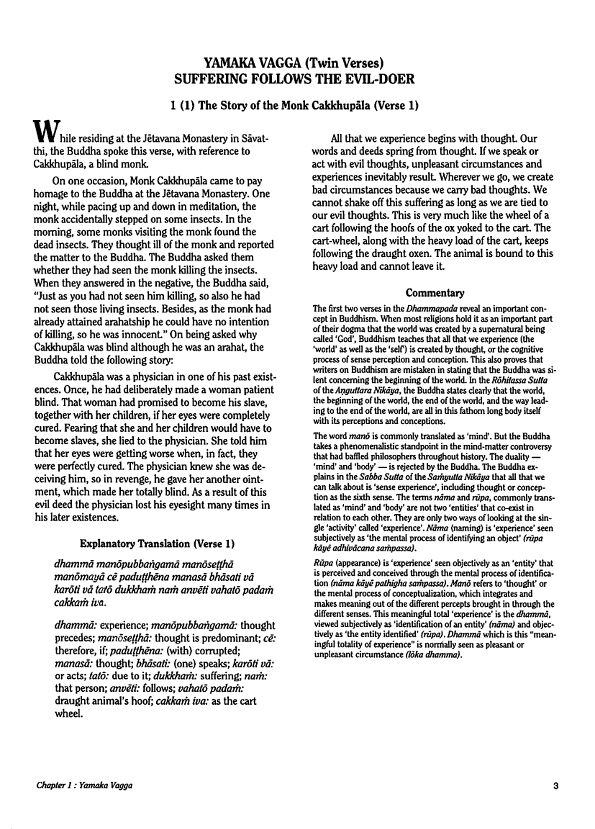 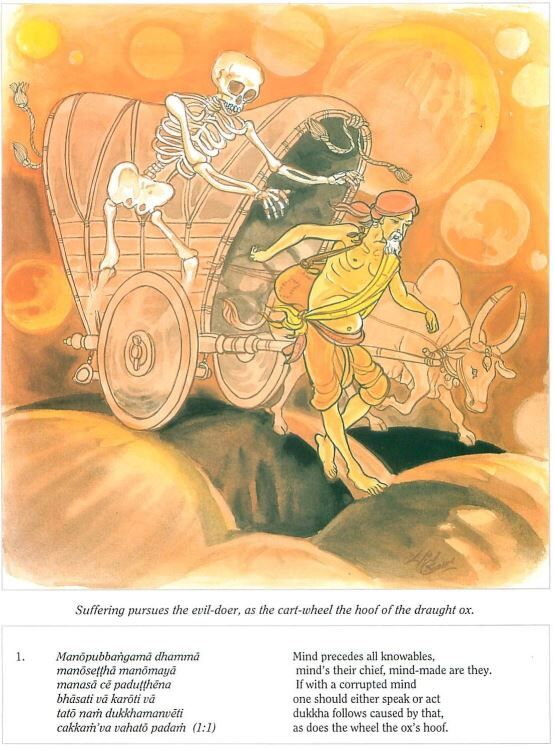