Buddhism FAQ0 >> 2.What is Enlightenment

2. What is Enlightenment? What are the Trance States?[]

Note1:All Trance states(jhana/dhyan/zen) come under the superset called Samadhi as described by Lord Buddha in the Eightfold path and knowledge gained from observing the Trance States is called Panna.

Note2: This page tries to explain the highest meditative states to be achievable in Buddhism. The knowledge is mentioned in only few places in Buddha's teachings. This is not explained to lay persons & even not to novice monks. But here it is. Please do not change.

Meditation or Sati
Watching all organs & trying to awaken these using meditation(sati).

Note: All Jhana/Samadhi states are blissful, the difference is in attitude.

1. Bliss of First Trance(Jhana/Dhyan/Zen/Samadhi)-First Awakening Within Self- Having Thoughts With Discernment(Viveka Samadhi)

(Note : With practice of meditation focusing on body & mind with equanimity, rapture occurs, awareness is withdrawn from senses & from body , withdrawn within spine & brain where a great light is perceived along with great bliss. Here mind is with thoughts. Buddha, as Prince Siddharth, was already born with this state from childhood , being an advanced being who had been meditating in past lives.)

(Note : With state similar to earlier, tranquility of mind is also achieved along with greater bliss. Here mind is without thoughts)

(Note : With state similar to earlier, equanimity of mind & body with great bliss , the bliss being enjoyed.)

A monk, with the abandoning of pleasure & stress/suffering — as with the earlier disappearance of elation & distress — enters & remains in the fourth jhana(trance): purity of equanimity & mindfulness, neither-enjoying-pleasure-nor-pain(detachment). (from this state onwards the meditator experiences the body becoming totally still as if into benign paralysis but awakened within).

A monk, with the complete transcending(samatikamma) of (worldly) form-perceptions(Rupa-sannanam, sanskrit:sangyanam), with the disappearance of perceptions of resistance(patigha-sannanam), and not heeding perceptions of diversity(nanatta-sannanam) (within self), (now perceiving) 'Infinite space is this(ananto akasoti),' enters & remains in the dimension of the infinitude of space (akasa-ananch-ayatanam; sanskrit : anant akash ayatanam) (fifth trance state).

(Note : Can perceive into infinite space. I see all. Here the ability to perceive with divine eye extends upto infinity. Can see any world, planet, stars etc visible as well as invisible. The magical abilities start from here but limited to knowing only. However if a person remains busy in knowing various worlds, it impedes progress so one is required to move ahead & meditate further.)

(Note : Awareness expands out of body in all directions upto infinity, silently, being able to exist anywhere/everywhere & perceiving all, omnipresence. I am everywhere. Magical abilities are gained from here to see as well as to manipulate. However if a person remains busy in seeing & manipulating , one's progress may be hindered. Besides if one makes wrong move against Dharma then one may get into state of punishment by natural justice. Wisdom is to remain in the path to meditate more & progress further)

A monk, with the complete transcending(samatikammam) of the dimension of the infinitude of consciousness (vinnan-ananch-ayatanam), (now perceiving,) 'There is nothing(natthi kinchiti),' enters & remains in the dimension of nothingness(akinchan-ayatanam) (seventh trance).

(Note : Realizing Nothingness/Emptiness of Worldly Dimension. This like a paper on which picture of universe is on one side and on when turned 90 degrees one sees only the edge i.e. the picture disappears from view. Transcendence starts from here.)

A monk, with the complete transcending (samatikammam) of the dimension of nothingness (akinchan-ayatanam), enters & remains in the dimension of neither perception nor non-perception (nev-sanna-na-asannayatanam; sanskrit : nev-sangya-na-asangya-ayatanam) (eigth trance).

(Note : All worlds fade away & worldly consciousness also fades away)

A monk, with the complete transcending(samatikammam) of the dimension of neither perception nor non-perception (nev-sanna-na-asanna-ayatanam), enters & remains in the cessation of perception & feeling (sanna-vedayit-nirodham; Sanskrit : sangya vedana nirodham) (ninth final trance - state of nibbana aka Nirodha).

The main difference between this & other states is that in this fully realized state the person loses one's sense of self(I) yet fully aware. The 'I making' attitude is stopped.

(Note : Realizing Final , transcendental, non-worldly state of timelessness,super-consciousness, omnipresence, eternal life & eternal Bliss- The Nibbana State- after realizing which , there will be no rebirth therefore, hence no suffering ever i.e. supreme bliss for eternity.) 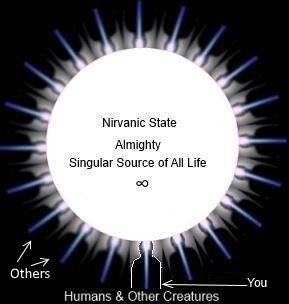 Another way of depicting Nibbana in relation to other creatures.
Also see : Buddhism FAQZZ Meaning of Life 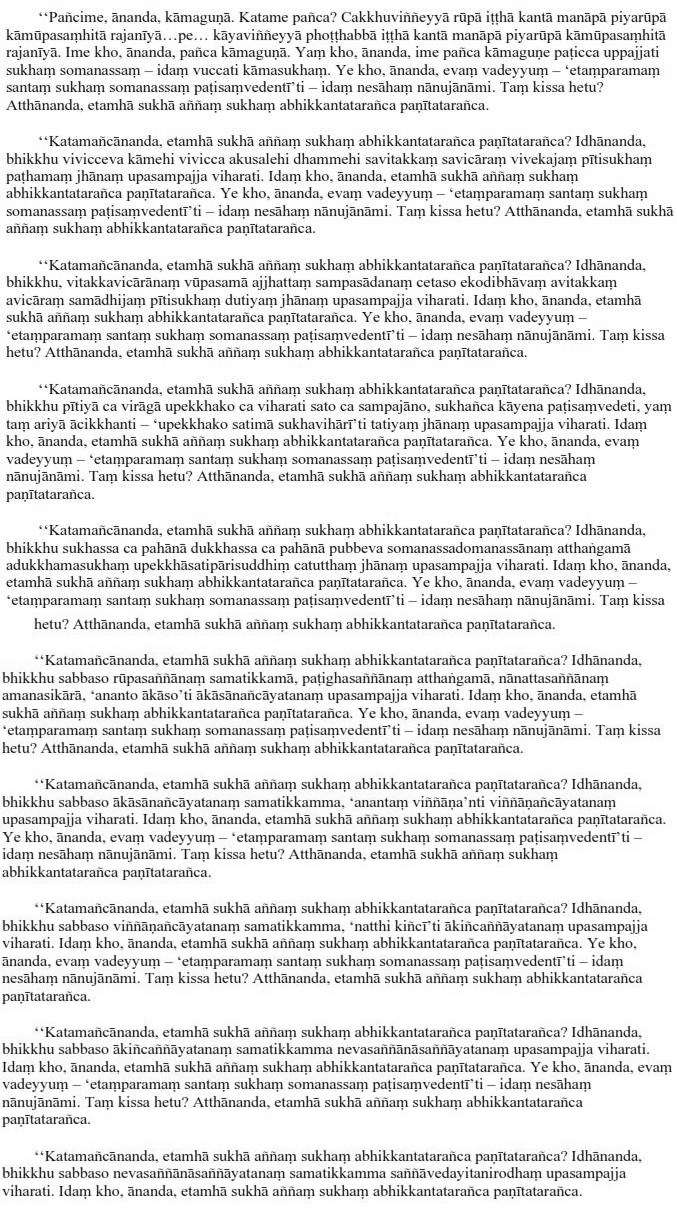