Buddhism FAQ0 >> 1.What is Buddhism

Note: This page tries to explain the highest to be achievable in Buddhism in simple terms. The knowledge is mentioned in only few places in Buddha's teachings. This is not explained to lay persons & even not to novice monks. But here it is. Pl. do not change.

Buddhism is the path of Spiritual Awakening based on experience, it treats all humans as equal & capable of practicing it as much as they can. 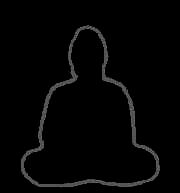 An ordinary person experiences the world through sensual organs and develops bonds of likes(Raga Hindi: Raag) & dislikes(Dosa; Hindi : Dvesh) with the material world, which leads to increase of negative characteristics i.e. anger,hatred,violence,lust,greed,attachment,material desire,craving,depression,sadness,rage etc. These bonds are also called Sanhara(also Sankhara; Hindi samskar) i.e. conditioned. After death one may be reborn in any state & in any world according to these bonds, desires & deeds (kamma Hindi:karma). Good deeds (donation etc) may lead to being reborn in heaven as an angel or as human again, harmful/lustful bad deeds may lead to 4 woeful states of suffering (1.animal/insect, 2.ghost/peta Hindi:preta, 3. asura/violent demon or in 4.hell ; these woeful states are enumerated by Lord Buddha). These bonds lead a being to many many rebirths and in every rebirth, the being experiences suffering. (Though angelic rebirths in heavens are of bliss but angels/devas do not live forever, and the end of angelic life, after millions of years, also causes suffering due to transition). Thus every creature is getting reborn again & again for many (uncountable) number of times while the universe is also undergoing cycles of expansion(big bang) and then universal contraction(collapse) on & on (in Pali: samvattham & vivattham see Digha Nikaya-Samannaphala Sutta in the section of Recollection of Past Lives). The devil (called Mara in Pali-English & pronounced Maar in spoken pali), the lord of death,desire & rebirth, sees that every creature remains in the bonds & thus gets rebirth again & again, so every creature is a prisoner to one's own desires & attachments of worlds(lokas). Removing these evil bonds of likes & dislikes will cause awakening & finally to Nibbana (Hindi:Nirvana/Moksha English:Salvation) i.e blissful unconditioned state free from rebirths.

This Awakening is achieved through first generosity(donation) then with 3 steps of Dhamma i.e (a) Seela (Morality) (b) Samadhi (Intense Meditation leading to trance state); (c) Panna (seeing inner light in Trance state):

(a) Morality/Ethics (Seela in Pali; Hindi:Sheel) such as No killing, No stealing, No sexual misconduct(brahmacarya), No Lies, No intoxicants(alcohol, drugs) etc. (There are many more rules of ethics for Monks/Bhikkhus). Morality is extremely important, without it, the awakening\enlightenment will not occur.


(b&c) Meditation & Awakening (Samadhi & Panna Hindi: Pragya short form of pratyaksh(direct)+gyan(understanding)) : It is accomplished through first, focusing attention on breath while removing thoughts to keep steady attention and then secondly, entire body is scanned with attention moving to various organs while keeping mind in equanimity(samatha) i.e. keeping attitude of neither like nor dislike to any feeling/sensations. At the end of meditation, one is supposed to transmit goodwill to all beings with this idea 'May all beings be happy'.

During meditation(see left, as in Vipassana), a person may experience many different spiritual experiences i.e. pleasant visions, horrifying visions etc. however one is expected to keep the practice steady & not give up. Actually, the meditation acts as a soap to cleanse dirt i.e. bonds of likes & dislike to the world. If a person dies before experiencing any level of awakening, one's fate will be similar to an ordinary person(above) i.e. process of rebirths continues. However, the fruits of meditation are not lost, one remains under unseen spiritual protection & in some future lifetime, the divines help such persons to again find teachers , learn meditation & the progress continues.


After a long practice of meditation many hours a day (may take years), intensity & focus increases then peacefulness of mind is achieved , then the body achieves calmness from strong emotive sensations (Pali:pasaddhi, Hindi: prashabdhi), then a strange unseen blissful illumination(panna) appears within the head & spine which can only be experienced, and then afterwards various trance states are achieved and many types of Awakening occur step by step , all with extreme bliss :

1-4. First, Within : One experiences the entire spinal column & brain extremely alive & active, filled with divine light ,super charged as well as radiating goodwill to all

This state occurs in the first four trance states(1,2,3 & 4, see at end of page) when a lot of evil bonds are shattered. The process is similar to a Linear Particle Accelerator or the operation of a Laser. A person achieving first awakening now understands the divine(spiritual) element within, which is one's very source of life. Experiencing it first hand, this person now refrains from doing any wrong act(or intention/thought) because the wrong act may deprive one from the experience of the first awakening. This person is now freed from being reborn into any state of suffering (animal/insect, ghost/peta, hell or asura/violent demon). Rather one can only be reborn 7 times, that also in the higher states either in human world or in heaven as angel/deva and there too one practices meditation and will become free(achieve Nibbana Hindi:Nirvana) in 7 rebirths only. Life of an angel in heaven is considered in many millions of human years. The state is called Sotapana (one who is in the stream/sota sans. strot). Buddha, as Prince Siddharth, already had this state from childhood , being an advanced being who had been meditating in past lives.

5-6 Next, Universal: The attention/consciousness expands out of body & permeates now to entire universe upto infinite space with infinite consciousness. One can know anything anywhere, even the upper heavens filled with arch angels(brahmalokas), heavens with angels(devas), all the material world, the world of ghosts and also various hells. This state may lead to making one wrongly believe that one has achieved the final truth (and as God) but it is not so. Buddha achieved this state following his Indian gurus such as Alara Kalama & Uddaka Ramputta but unlike others, he was not convinced about the finality because some bonds(sanharas) were still there.

This state occurs in trance states 5 & 6 (see list below) when most of evil bonds are removed but only little remain. A person achieving this state now understands one's unity & link with all the creatures. And after death of the body , this person may be reborn only 3 times either in heaven as angel/deva or in upper-heaven/brahmaloka as arch-angel/brahma (as a being with form & mind) and there also one continues meditation and gets liberated (achieves Nibbana) according to the efforts put in. Life of arch-angel is considered in billions of human years. This state is called Sakadagami (one who returns). Magical powers may also be attained here (and also in next stages) because one may learn to manipulate anything anywhere in the universe. This state can be considered as god mode in a virtual reality game. Here individuality of the person (self/ego/sense of I) remains.

7-8 Nothingness : Now the attention is withdrawn from the worldly and all worlds vanish from the sphere of attention, nothingness/emptiness (this is only an intermediate state):

This state occurs in trance states 7 & 8 (see list below) when extremely little evil bonds remain. A person achieving this state now understands that there is nothing real & everything is unreal  as illusion, virtual reality, as mirage and  as pictures shown on screen in cinema hall. This state is similar to a person in cinema hall who turns one's attention away from the screen and now looks at the dark hall around. After the death of the body , this person may be reborn only one time that also in the highest upper-heaven/brahmaloka as arch-angel/brahma (having no form but having only mind) and there also continues meditation and gets liberated (achieves Nibbana ) from there. Life of this formless arch-angel is considered in many kappas(Hindi: kalpas) i.e. many cycles of expansion(big bang) & contraction(collapse) of universe (pali: samvattham & vivattham see Digha Nikaya-Samannaphala Sutta). This state is called Anagami (one who does not return after getting reborn only once in higher plane). Here also, individuality of the person (self/ego/sense of I) remains.

9.Final, Nibbana/Arhat/Jin : The final state of Nibbana when one experiences as becoming the ocean of divine light, i.e merges with infinite eternal state having no change , no time & no physical properties & attaining final bliss, what people of other faiths also call as God (Buddha was also called as Bhagava or Bhagavanta meaning God): 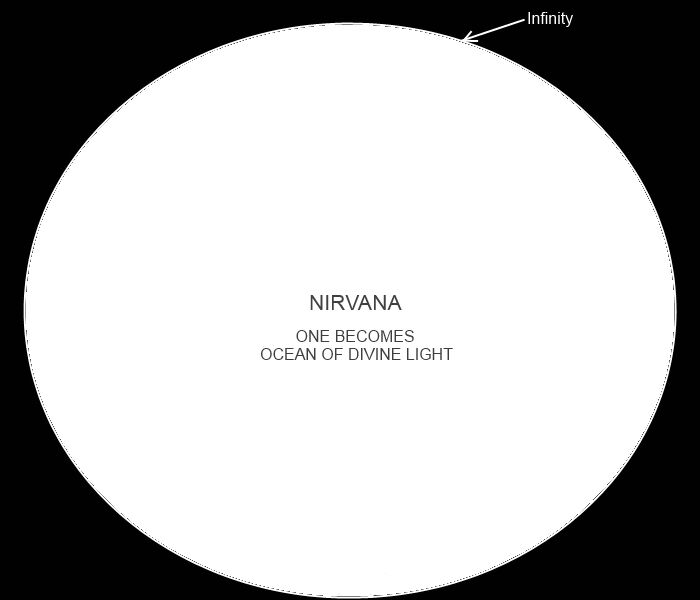 This occurs in trance state no. 9. Here all the evil bonds are removed completely. A person achieving this state now understands reaching the non-returnable other shore. This state is similar to a person in cinema hall who moves away one's attention from the screen , looks around , turns one's head in opposite direction and sees the source of light. Here one also simultaneously experiences 3 phenomenon (1) Seeing past lives & knowing how one lived & what acts caused what effects (many past rebirths).(2) The lives of other creatures are also known with divine eye , along with knowledge of their causes & effects . (3) The understanding of elimination of one's all evil bonds completely. After achieving this state of Nibbana Hindi: Nirvana/Moksha, there is no more rebirth, it is the state of final enlightenment. It is also dissolution of the sense of 'I' or self because one's identity now merges with the universal singular state (Nibbana Hindi:Nirvana) which Buddha called as the ocean of (divine) light. This is just like pouring bottled water into ocean, now the water dissolves into ocean & is now called ocean.


The person achieving this final state is called Arahat/Arahant/Arihant in Buddhism meaning, one who has conquered all evil (bonds of lusts) and after death of the body, this person remains eternally alive in supreme bliss forever in the state where there is no time, as the ocean of divine light i.e. transcendental omnipresence (probably Nibbana is the scientific concept of omnipresent invisible Dark Energy whereas the realm of Devil i.e. Mara can be considered as the Dark Matter + Material Universe ).
Many disciples of Buddha achieved this state of Nibbana whom Buddha called as equal to him. As told by Buddha , the only difference between him and the Arahant/Arahat is that Gautam Buddha was self-awakened (called Samyak-Sam-Buddha).
A person can also experience any state of awakening directly, without going through intermediate states depending upon the amount of evil bonds remaining. There are examples of monks & nuns directly experiencing the final state of enlightenment because they were meditating in past lives.

Thus, Buddhism is not a faith nor worship of God. Rather, it is the path of experience of becoming one, the almighty, that which people of other faiths call as God.

The entire process of awakening can be understood from the analogy of the flip of a coin with the worlds on one side and Nibbana on the other side of the coin. The intermediate state in which coin stands on edge is the state of nothingness.

1.First Awakening, Within Self(divine light in brain & spine)
2.Without Thoughts (only pure attention within)
3.Equanimous(all above but beyond Likes & Dislikes)
4.Detachment(from I/self while experiencing all above)
5.Perception of Infinite Space( all worlds visible & invisible)
6.Infinite consciousness (all above & I everywhere)
7.Nothingness/Emptiness
8.Neither perception nor non-perception (Transcendence from worldly Plane)
9.Nibbana Hindi:Nirvana/Moksha(non returnable state, no more rebirths)